The Girl With The Curly Hair 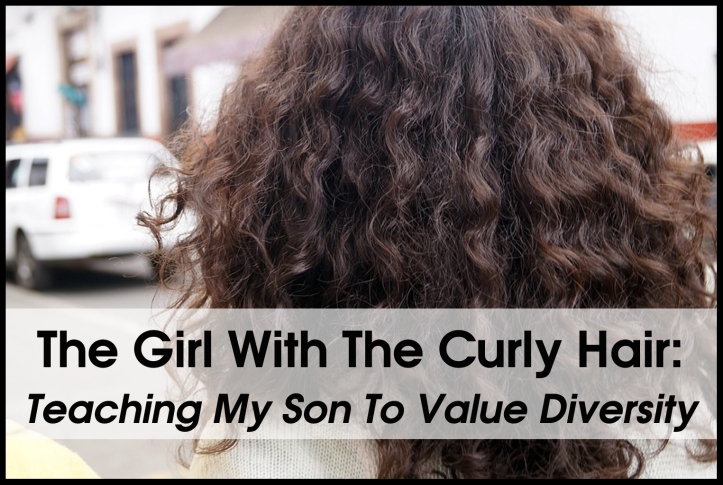 The Engineer is just recently becoming aware that other people are different than he is – and he’s starting to question why.   His thoughtful question “why isn’t my skin brown, mommy?” opened a door to a multitude of other questions.

It’s a tough subject.  I’m hyper aware of my privileged position as a white, middle class, educated woman, and how that frames any conversation that I have with my kids.  I’m also highly aware how pointing out our differences and defining races can be a bad thing.  I don’t want my kids to be color blind: I want them to value a person for who they are.

Two incidents this week got me thinking about how I want to handle the subject with my kids.  One story isn’t mine to tell in detail: a member of one of my homeschooling groups told us her son is in the hospital.  He was attacked because of his relationship with his girlfriend – they are a bi-racial couple.

The other incident happened yesterday at lunch, and it made me realize how much words can hurt even when they’re the truth.

The kids and I were eating lunch at a fast food restaurant.  The kids had been playing in the indoor playground for a while, and I had gotten them ice cream cones.  As they happily slurped their ice cream, one of the little girls they had been playing with came back out of the play area.

Her grandfather was sitting at the table next to us: he looked like a hardworking person used to getting the job done, and he was white.  His granddaughter was bi-racial.  They had interacted a little while we were there, enough for me to see just how much he loved her.  It made me smile – this hardworking, crusty looking, tough guy clearly loved this little girl so much.

As she walked past the Engineer to her chair, he paused, and then asked me “mommy, why is her hair so curly?”  She was basically sitting right next to him and clearly heard him.  I had a breath of a moment before I answered him, and I considered what I said very carefully.  Why?  Because I saw her react.

Her shoulders tensed up, she looked away, and her body language looked like she was bracing for a hit.  Her grandfather paused what he was doing and waited to see how I would respond.

I smiled at the Engineer and said “because that’s how her hair grows, bud.”   He said “but mine isn’t…” as he searched for the right word.  I told him “no, yours is straight like mine.  You got my hair.”  And then I quickly told him a little story about how when I was his age, my sister had beautiful curly hair and I was so sad because mine was straight.

Her shoulders relaxed.  She finished her juice box and hopped back down to go play.  Crisis averted, her grandfather went back to what he was doing.

I wanted to cry.  For a child to react like that meant that she had already heard mean, ugly comments.  She was beautiful.  She was adorable.  She was perfect just the way she was.  And I wanted the Engineer to know that, but I didn’t know how to tell him that because to him, she already was.

If I had told him that the little girl’s hair was curly because she was biracial, it would have been the truth.  But it would have hurt her and confused him.   He doesn’t understand what that means and why some people don’t like it.

I’m dreading the discussion I need to have with the Engineer, because I feel like I’m going to destroy his innocence.  He lives in a world where we judge people on their actions, not their skin color, the way they look, or the car they drive.  I wish I could let him stay there forever – but I need to tell him how hurtful his words could have been to the little girl, and why he shouldn’t say things like that.

I realize that agonizing over this discussion is, in itself, a sign of my privilege.  He’s clueless about race relations because he’s white.  If we weren’t white, chances are we would have already discussed this because he would have experienced discrimination already.

Maybe if we all do this, teenagers won’t end up in the hospital because someone didn’t like their girlfriend.  I can hope.

2eHomeschooling participates in the Amazon Services LLC Associates Program, an affiliate advertising program designed to provide a means for sites to earn advertising fees by advertising and linking to amazon.com
%d bloggers like this: