Drawing The Line At Turtles 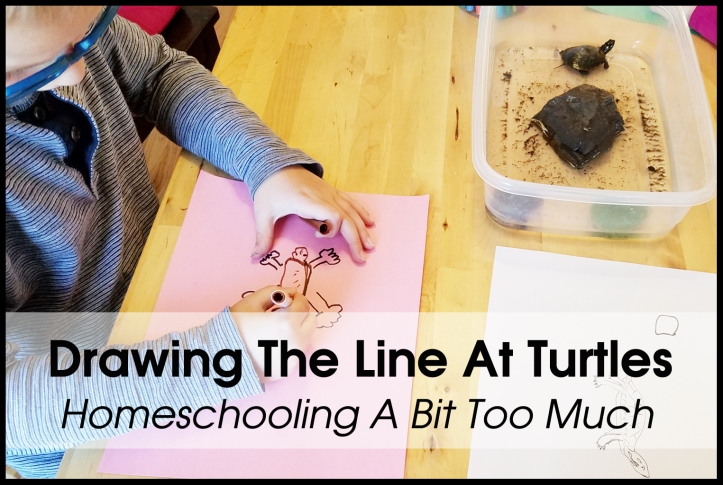 I’ve reached that point.  You know – that point where you stop and look at the big picture and realize “oh crap!”  Yup, that point.

It’s not like I don’t already have a ton of things to do, you know.  I’m blogging, I’m teaching my kids, I’m creating products for Teachers Pay Teachers, and somewhere along the way the housework gets slapped at and the laundry is piled in a corner.  So, yes, I’m a little busy.  Stay-awake-until-2 a.m.-every-night kind of busy.  Yup.

That being the case, why am I in this mess now?  Because every single little thing is “educational.”  Sure, we can bring home that “frog” spawn and raise tadpoles.  Or rather, salamanders, because I goofed and didn’t realize that the double layer of jelly meant DO NOT TAKE THIS ONE HOME!

Sure, we can catch ladybugs and hope for some eggs – after all, what are the odds of TWO of them actually laying eggs the first day we had them?  /headdesk

Sure, let’s order some praying mantis casings and hatch the little voracious carnivores, why not?  After all, we’re already starting a mosquito farm to feed the salamanders, and a wingless fruit fly farm for the ladybugs (and salamanders.)

And while we’re at it, let’s keep an eye out for butterflies laying eggs on our fennel – because ALL of the kids asked if we can raise caterpillars again!  Apparently, hatching two different moth cocoons just isn’t the same.

So when we went for a nature walk and found not 1, but 2 absolutely cute, adorable, lovely, amazing little turtles, that was it.  No, we’re not keeping the turtles.  No, we’re not going to give them a special little pool to live in.  And no, we’re NOT going to try to get turtle eggs to raise.  Not happening.  No way in hades am I signing up for that!

They came home with us anyway.

We oohed and aawed and drew pictures.  We made them a cute little habitat in a box with a rock to climb on, water to swim in (aquatic turtles) and a few worms to eat.  We looked up what they ate, and asked if anyone knew what kind they were online – red belly scooters, apparently.  We even got to watch one poop as he clambered around the box.  In little kid world that’s the ultimate cool.

We tucked them in to bed and turned off the lights.

The next morning, I was implacable.  Turtles were going home.  Look guys, they’re hungry!  They ate both of the earthworms and we’re out.  Time for turtles to go swim with mommy and daddy turtle in the pond and catch bugs.

We packed them up and delivered them back to their pond.

I prodded reluctant little turtles to come out of their comfy bucket, but I really didn’t want to let them go either.  They were so alert and cute, with their bright red underbellies and their heads sticking way out further than I thought turtles could.  As they swam back into the pond I realized that this was yet another good teaching lesson.

We don’t collect wild critters and keep them.  Sure, we observe and raise, but we release.  Every time.  Because that’s the way it should be – we amateur wildlife observers have no business keeping wild critters.  That’s the job of zoos, rescue organizations, and scientists.  Which we’re not.

We’re raising salamanders – from eggs.  We’re giving these fragile little nymphs a fighting chance and helping their population stay strong and stable.  We’re raising ladybugs from eggs – not releasing wild-caught ladybugs into our garden.  We raised butterflies from eggs – did you know that most caterpillars don’t make it to adulthood?

In every case of wildlife observations our family has made, we’ve released them back into the wild.  The tadpoles from last year went to their original creek after they morphed.  The butterflies were released after hatching when their wings were hardened.  The salamanders will be released at their original creek once they morph as well.  And the ladybugs?  They’re staying right here in my garden to fight the aphid problem.

We’re helping them survive an increasingly over-developed area.  That’s good, that’s helpful.  But we’re not crossing the line of helpful into collecting.  Because that’s how populations falter and disappear.

Conservation 101 for school today kids, say goodbye to the turtles!