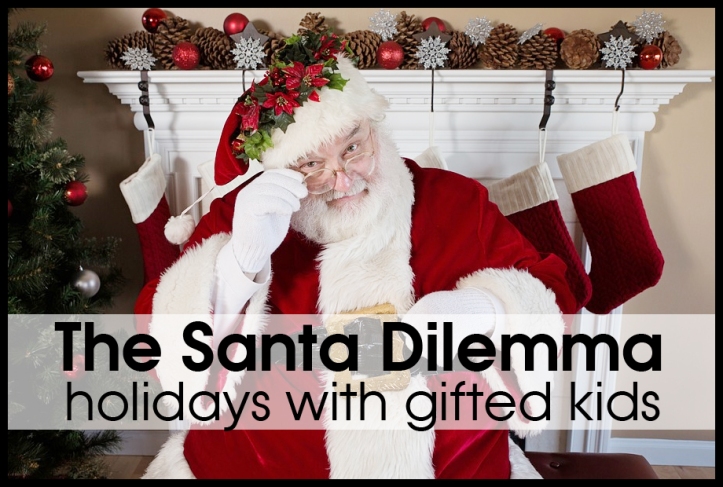 If you celebrate Christmas, chances are you’ve had a brush with the Santa dilemma.  Do you tell your kids that he’s real?  If they already figured things out on their own, how do you keep them from blowing it for others?  And possibly, you’ve already dealt with the upset parents of kids who now know more than they should, thanks to your kid.

Santa is rough.  As a kid, I always thought Santa was kind of a crappy person because he only came to see rich kids.  Poor kids maybe got a measly thing or two, while rich kids got piles of presents.  It didn’t seem fair to me.  My parents never let us believe in Santa anyway, and we were always baffled what to say to random people who asked what Santa was bringing us for Christmas.  We knew that our parents couldn’t afford much and we didn’t expect a lot, so why even ask for things that we couldn’t have?

Kid-that-I-was didn’t mind losing the magic of Christmas before I even knew it existed.  Santa wasn’t fair, and I didn’t like people who weren’t fair.  I still don’t, to be honest.

Santa and my own kids

When it came time for Christmas with our own kids, I was influenced by the kid-that-I-was.  So was my husband, but in a different way.  He wanted that magic for our kids, and I did too, but without the burden of a lie.   We do Santa, but with a slight twist.  This is what works for us and our kids who question everything – every family is different, and every kid has different needs.

How we handle Santa started with a question from my oldest, after an unwise trip to 2 different malls in one day.  “Mommy, how can Santa be at two malls at once?”  Um…..  I scrambled for an answer.  This smart kid of mine hit on a dilemma, and he knew that 1 person couldn’t be in 2 different places at the same time.   His eyes were filled with doubt, pointedly accusing me of lying to him.

I promised a long time ago that I will not lie to my kids.  I may not give them the full details, but I will not lie.  That promise has gotten me into some seriously sticky situations, including the sex talk at age 6 when the Engineer wanted to know ALL the details.  All of them.  Including positions.  Because he has to know ALL the stuff!

A myth – where magic can freely exist

In our house, Santa is a myth.  We discuss lots of myths and they know the difference between myth and truth.  They know that the line sometimes blurs, and that there are lots of stories, songs, and no one really knows the truth.  So the myth – the true person of Santa – is shrouded in mystery.  He’s magic, just like dragons, the tooth fairy, and elves.  No one has seen him, but we know a lot about him.

The mall Santas – they’re Santa helpers.  They bring the love and joy of the holiday season to everyone who loves Christmas.  There are lots of Santa helpers, and not all of them look like Santa.  Everyone can be a Santa helper – you just have to spread love and help others.

We look for opportunities to be Santa helpers.  The kids help buy gifts for our county’s Christmas foster program and deliver them with me.  They helped me deliver gifts to various people we appreciate.  They picked out small gifts to give each other and their dad.  Their dad does the opposite with them to pick out small gifts for me.

Funnily enough, treating Santa as a myth and mall Santas as helpers has cut down on the anxiety.  It took years for my youngest to go anywhere near the mall Santas.  My oldest took almost as long.  We have pictures with Santa with only my daughter – because I refuse to force a scared, crying child to go near Santa (they always ask to go see him.)    We never discussed the naughty/nice list because I knew that was an instant anxiety trigger, and we’ve never made a super big deal about Santa.

Probably the biggest, most controversial deal of all – Santa doesn’t bring our kids gifts.  We tell the kids we’ve asked Santa to skip our house because mommy and daddy can afford to buy their gifts.  Santa needs to take “our” gifts to other kids who might not get as much.  Every gift they unwrap has a name on it – a label of who loved them enough to find a gift just for them.

If you shift the focus of Christmas from demanding stuff from some random guy to sharing love with everyone, it’s an amazing thing.  The kids are little and my youngest doesn’t get it.  He will.   They all still demand stuff, of course, but they know they’re demanding it from mom and dad, who have limits and are not afraid to say no.

If you’re thinking that this ruins the magic for my kids, don’t worry.  My oldest asked to bring mall Santa a gift (a shiny origami crane that I made at his request) and he happily told Santa what he wanted for Christmas.   He knows he’s not getting it because we already said no, but it doesn’t hurt to dream.

Santa didn’t know what to say to a request for a swarm of micro drones so my kid can learn swarm technology.  I bet he hasn’t encountered that one before!