Rough Day? Me Too 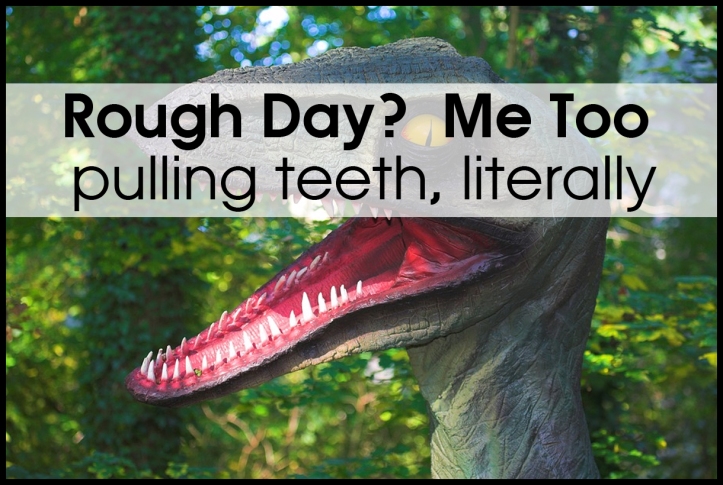 This parenting thing never lets up, does it?  One day we’re cleaning up the toys and building Lego spaceships, and the next we’re in the dentist’ office getting teeth pulled.  It’s always something.  There’s always a crisis looming around the corner, or an emergency just waiting to happen.

As an aside, will ANY of this kid’s teeth come in correctly?  I’m starting to feel like we’re doomed to one train wreck of tooth problems after another.

Did you know what you were getting into?

Sometimes I wonder if we parents had known what we were getting into, would we still have chosen to raise kids?  If someone sat you down and said “here, let’s spend the next week getting you sleep deprived, frustrated beyond belief, and questioning every choice you make,” would you have been so enthusiastic about that tiny cute baby?

In my less sleep-deprived moments, I daydream about designing a parenting course for high school that would include all of the crazy stuff we’ve dealt with.  The problem is that there’s no emotional connection in a course like that.  How do you explain the utter, stomach-dropping panic of losing your child in a crowd?  Or the feeling of fighting down fear in an effort to remain calm so that the little person bleeding all over you doesn’t panic too?  (That all happened this week, by the way.  Everyone is fine, just one kid missing 2 teeth.)

It’s almost impossible to describe what it’s like to physically restrain your kid BECAUSE you love him so much you’re scared to death that he will harm himself on the needle the dentist is holding.  Without that emotional connection, it’s tough.   It’s more than tough – it’s not physically possible to share what parenting is like to someone who hasn’t experienced it.

That’s not saying that there’s some elite parenting club that only other parents are part of.  There are tons of caring, wonderful people who work with kids who happen to not be parents.  And maybe not all parents feel this way: this paralyzing fear because I’m responsible for keeping these little humans alive and cared for while we shepherd them to adulthood.

No one ever told me that this would be one rough day after another.  I would love to blame it on special needs, giftedness, or something equally easy to target, but it’s really not that.   Those things complicate parenting, of course, but they don’t define it.  No, parenting is just hard.  Plain and simple, it’s difficult.  Doesn’t matter what age they are, because each age has different challenges and needs.

I cherish the less-rough days.  The moments when a smile is all the kids need to be happy, or riding their bike makes their day.  Those moments – and the kids themselves – make it all worth it.

The positive side of things

If you had told me that my 3-year-old would wake up every night and refuse to calm down, I might have skipped parenting altogether.   But then I would have missed the feeling of awe when this kiddo snuggles up to me and falls asleep, content in knowing that I will keep him safe.

If you had said that my daughter would spend entire shopping trips on her butt on the floor scowling at me and intermittently growling in anger, I might have decided it was just too much trouble.  And then I would have missed her making up a ballad and dancing around singing about how much she loves daddy.

If you told me that my oldest would keep asking questions until my ears bleed, I would have been horrified.  But then I would have missed the amazing ideas he comes up with, like a transporter that moves genetic material through a laser beam (because he was frustrated with traffic.)

I guess that means that even if you had told me the unvarnished, brutal truth about my life as a parent, I would still have chosen it.  Because my kids are worth it.