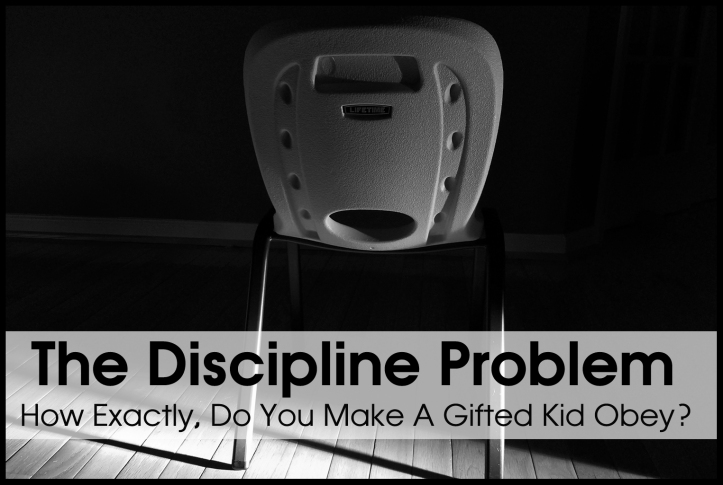 Wait!  Come back!  That’s not the end of this post.  Let me elaborate a bit.  Or verbally vomit, as I was accused of tonight by a random online person.

Gifted kids are, quite literally, too smart for their own good.  They know from a very early age that adults can’t make them do stuff unless we resort to force.  Even toddlers have this trick down – don’t want to obey?  No problem, go limp!  Lay flat on the floor and kick and scream.  When parents try to pick you up and forcibly carry you, thrash and flail so that they worry about dropping you.  Refuse to stand up and imitate a limp noodle.

Do you know how hard it is to carry a (heavy) toddler up the stairs when they’re determined to ooze bonelessly back down one stair at a time?

We joke in our house that the teen years will be easy because we’re already there.  While everyone else’s kids are doing time out and wailing about it while complying, our kids engage in long negotiations or point-blank refusals.  We have the attitude, the defiance, and the snarly teen already before we even reached the benchmark 5 year birthday.

And yes, we know that the teen years will be hell.  Because gifted kids don’t do easy.  Ever!

So what do we do about it?

Well, first you give up.  You simply cannot force a gifted, defiant child to obey.  Note I say “force.”  You cannot give them ultimatums because that backfires spectacularly.  Or they laugh – because they know they won’t really be grounded for a month.

In our admittedly low experience raising a 2e kid, we’ve learned that authoritarian parenting doesn’t work.  At all!  And god forbid you tell the kid they have to obey “because I told you so!”  Prepare for an endless stream of negotiations, arguing, and questions about how you are qualified to “say so” in the first place.

The Engineer thinks that he is the equal of any adult.  In his mind, that translates to I want to out-trumping parents saying you can’t do that.  He’ll blithely do his own thing, ignoring every rule along the way if he thinks they’re unfair or that they don’t apply to him.  And let’s face it – NOTHING applies to him – ever!  Because he’s right.  Always.  (::cough cough:: remind you of anyone?  Yeah, apple doesn’t usually fall far from our parental trees.)

Let me share a few key things that we use as tools to parent the Engineer.  Every child is different, of course!

We started off authoritarian.  Me especially.  If I told my kid to do something, gosh darn it, I expected them to do it!  Right then!

Ha!  That didn’t last long.  I couldn’t even get him to sit for time out.  What was I supposed to do, hold the toddler down in his chair?  We watched Supernanny and tried the calm down corner.  It didn’t matter how many times I put him back in after he ran away, he kept running.  It was a game.  If I sat near him, as the all-knowing nannies suggested, he did his level best to create bruises and break bones.

We even tried buckling him into his high chair.  He figured out how to throw the chair backwards – and even “walked” it around the kitchen precariously.  Not exactly time out.

Right about then we figured out that the Engineer had Sensory Processing Disorder.  As we learned to deal with that, we realized that he literally couldn’t control himself most of the time.  Then we found out about his anxiety.  I sardonically think of his anxiety as “the root of all evil.”  Nine times out of ten, his anxiety is provoking a behavioral issue.

We turned our focus from “making him behave” to “helping him learn to cope.”  It sounds so silly and simple, but that change in mindset made a world of difference.  To him, we switched from being the enemy – someone who tried to force him to do things he hated, to allies who understood that he was having a hard time and who wanted to help him cope.  This kind of mindset makes a huge difference in how we respond and how frustrated we get.

Sure, I still get frustrated.  Mr. Genius jokes that I’ll have “the look” after a long day out – the “is it bedtime yet?” look.  Or the “can we return them to the hospital?” look – depends on how badly the day went.  Knowing that the Engineer struggles doesn’t make dealing with it much easier.

Please note that compassionate parenting does NOT mean giving the kid a free pass.  We expect him to behave.  We figure out ways to help him do that.  We use consequences as discipline – with the goal being that he learns a lesson.  We do not allow him to just get away with it.

If X happens, then Y always happens in response.  For whatever reason the Engineer didn’t understand consequences until he was, oh, about 5-years-old.  And even then it was a sketchy, confusing situation to him.  He still struggles with it, but it’s more a refusal to accept responsibility for his actions than pure ignorance.  Being extremely consistent helped him understand consequences better instead of him thinking that we’re randomly being mean to him.

You might think you’re consistent.  We did too.  But you’re not – not fully.  And what if there are two or more parents?  Everyone needs to be on the same page, doing exactly the same thing for this to click.

Note that consistency doesn’t mean identical responses.  Confused yet?  Let me give you an example:

X action happens: the Engineer threw a toy at his little brother.  Hard and fast rule in our house: no throwing (anything but fake snowballs and bean bags.  Because gifted wanted the exact rules spelled out!)

So while the method and response changes depending on the situation, the end result is the same if he throws something to hurt others:  lose something that you value.

Punishment is petty and vindictive – it’s making the kid pay for what they’ve done or how they’ve upset you.  Discipline has a different focus: learn a lesson.  Think about your goal with a situation – do you want your kid to learn and grow in this situation, or are you trying to make them pay for it.

Put that way, punishment sounds very angry.  And at the root, it is.  It’s why parents generally respond differently in public than at home.  If your kiddo pitches a tantrum at home, you’ll probably calmly ignore them.  If they do it at the grocery store, you’re more likely to be upset and embarrassed by how they made you look.  You want them to never do it again, so your response is probably harsher than just ignoring the tantrum.

That’s human nature: they made me hurt, now I want them to hurt too.  It’s not effective parenting for gifted kiddos.

Formulate your discipline with the end goal in mind: teaching the right lesson.  For example:

The Engineer ran away from me on a nature walk: now, for every nature walk, he has to stay within hearing range of me.  That’s about … hmm …. 10 feet.  Because he tunes me out otherwise.

You think he likes that?  Not at all.  And every time he gripes and whines, I remind him how scared and upset I was when he ran off, and how he could have really gotten hurt.  And I reinforce: Y is happening now because you did X.  YOU caused this – and if you want it to change, you have to change your behavior.

Gifted kids often change interests or hobbies. Threatening to take away a video game may work one day, but fail the next depending on what they want to do.  You have to figure out – split second here! – what matters the most to them right then.  And then formulate a response that is appropriate to the situation.  In other words, be quick on your toes, parent!

The Engineer’s motivators change moment by moment.  I’ve figured out that practically anything new is highly desirable compared to all else.  I’ve also figured out that threatening his idea of “normal” is incredibly mind-blowing for him.  I once told him that the next time he defied me and misbehaved again, I would flip the breaker and turn off the power.  He decided that wasn’t worth the thrill of getting his own way!

Even in the face of losing the lights and power, he still tried to negotiate his way out.  I was a “mean mom,” and it was my “job” to give him what he wanted.  So before this particular stand-off ended, I briefly stated what I am expected to provide as a parent – and pointed out that lights and power weren’t on that list.  He had to evaluate the odds before deciding what was the best personal outcome for him!

We deal with that a lot – our kids will happily misbehave if they feel like it’s worth dealing with the consequence.  So the motivator has to sting just enough to get their attention, but not enough to trigger the “fair” fight.  The gifted sense of fairness is a royal pain in the rear!

5. Figure Out The Root Cause

It could be asynchronous development: they’re responding like a 2-year-old because emotionally, they ARE 2!  It could be that lovely fight or flight response and they can’t control it because their brain took over and went nuts.  But when in doubt, my go-to thing to check is always anxiety.

Anxiety is a big deal.  It often manifests as anger or defiance.  They don’t want to do what you told them to because it’s bothering them or whatever, and they don’t know how to explain it.  Instead, they resort to blowing up or refusing to obey.  The more you insist, the more they dig their heels in.  The harder you push, the more upset they get.

Anxiety is a bear.  No doubt about it.  I’m hoping that the Engineer will outgrow this particular quirk because it’s horrible to live with anxiety.  It’s physically stress-inducing, and it’s difficult to parent, let alone live with it.

You know your child.  You know what makes them tick better than anyone else in the world.  Everyone else might think that your kid is a misbehaving mess, but you know differently – you know how to help them.  And that’s what I really want to do – help my children grow into responsible, emotionally capable adults.  I might go completely gray and spend my time staring into space with the “look,” but I really do care!   They know that 🙂

(My kids are a serious case of karma coming back to bite me in the rear.  I distinctly remember wondering why kids just obeyed adults when I was a child.  I reasoned that adults couldn’t really force them to obey – not without actually using force.  Which led into a life-long fascination of how we yield power to individuals.  I should probably send a nice Christmas gift to my parents this year!)