Life Lessons I Want My Kids To Learn 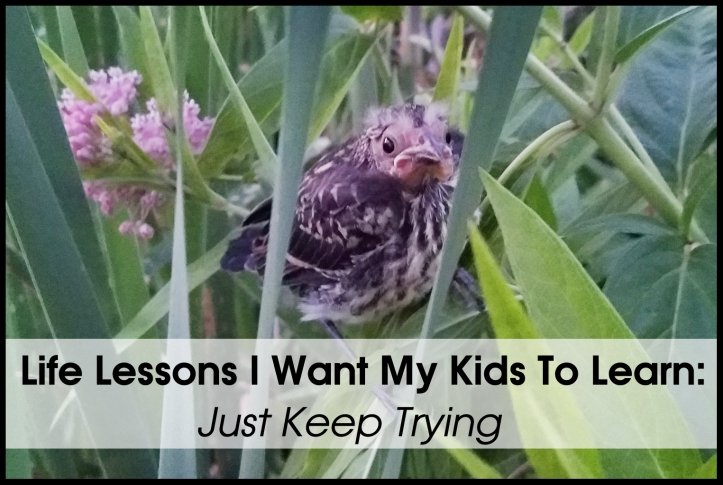 I’ve run smack into a characteristic of gifted kids with my son: he gives up if something is too hard.  Actually, he gives up for a lot of reasons: it’s too hard, he’s bored, he’s gotten distracted, he’s hungry, his siblings yelled.  Loads of reasons.  I want to get exasperated and treat him like he’s being lazy, but I know he’s not.  My daughter, on the other hand, is showing signs of laziness.  It’s a completely different animal.

I realize that it’s anxiety and perfectionism, plus the added zinger of never really having to work at something.  His work “muscle” isn’t very strong.  And it’s my job as a parent to teach him how to grow his muscles and strengthen them.

I watched him stand, paralyzed, in the middle of the messy living room after I told him to start picking up the toys.  And I realized that anxiety was holding him back.  He didn’t know what to do first – he saw the vast expanse of the job that needed to be done and he didn’t know how to start.  So we started teaching him the process: pick up all of the Duplo blocks and put them in the bin.  Done?  Ok, then let’s get all of the hotwheels picked up and put them in the car box.  Good job!  Now, what’s left?  Let’s pick up the straw building toys and put them back in their box.  One thing at a time, one section at a time.

He’s learning quickly.  Now, I’ll ask him to pick up the toys, and he’ll tell me that he’s doing X toys first.  Then Y toys.  And he keeps going (as long as he doesn’t get distracted) without being paralyzed.

Unfortunately, working on strengthening his “work” muscles can be difficult.  He fights back.  He doesn’t want to do the hard stuff.

Take reading, for example.  He’s right on the edge of reading, but he’s fighting it tooth and nail for no apparent reason.  We’ve checked for dyslexia and other processing issues and that doesn’t seem to be the problem.  I know he can sound out letters and put them together to make words, it’s just painful and slow.  He doesn’t like painful and slow.  He would much rather guess at the words and hope he gets them right.

So we’re going slow, at his pace, but we ARE doing reading.  He can’t skip out of it and hope it just happens on its own.  We keep trying.  And the other day, when he read the word “make” and then we made the connection to the word family, he was excited and wrote down all of the ‘ake words we could think of.  Take, bake, lake, and so on.  Being a typical gifted kid, he wanted to add quake and snake – so we had to discuss the dilemma of Q and U.

I’m rather sympathetic to his difficulties, but he gets no mercy from me because I’ve been there.  I was that kid.  I let perfectionism and anxiety paralyze me into thinking that if something wasn’t perfect, then it wasn’t good enough.

I didn’t know that I was gifted at the time, but looking back I see the signs.  It took me a very long time to realize just how much perfectionism was holding me back.  In fact, I think it wasn’t until I was in college and trying alternative photography that I realized something profound: the journey was the whole point!  Not the finished product!

In alternative photography, you experiment.  You try something, and the next time you try it, it might produce completely different results.  It’s unpredictable.  For a perfectionist, that’s hell.  I wanted it to do the same darn thing every time and it just wouldn’t.  And when I gave up and embraced the journey and the learning process, it was life changing.  Of course, I still get frustrated when I’m trying to do a set of images and one random one stands out with a completely different look because the toner went wonky.  That’s life.  Which is why I have sets of multiples for my big projects: I make extras just in case that happens.

The lesson I want him to learn – the lesson I want all of my kids to learn – is that it’s better to try than not.  It’s better to have a half-complete product with lessons learned along the way than abandoning it altogether.  You learn from failure.  You learn from success.  You will not learn all you need to know if you only have one half of the process.  You need both.

It’s a long, slow road.  We have time.  I’m not worried – he will eventually get it.  Hopefully faster than I did.  And hopefully he won’t go to the other extreme that I sometimes do and scramble to produce something just so it’s done.  Sorry, the laundry doesn’t need to have perfect crisp edges – it just needs to be clean and out of my way!

Guess I’m nudging him out of the nest a little on this.

(momma bird was quite upset and dive-bombing me as I took this image.  I didn’t realize baby was there, and turned around to see him staring at me.)