Growing Up Lonely: The Friend Dilemma 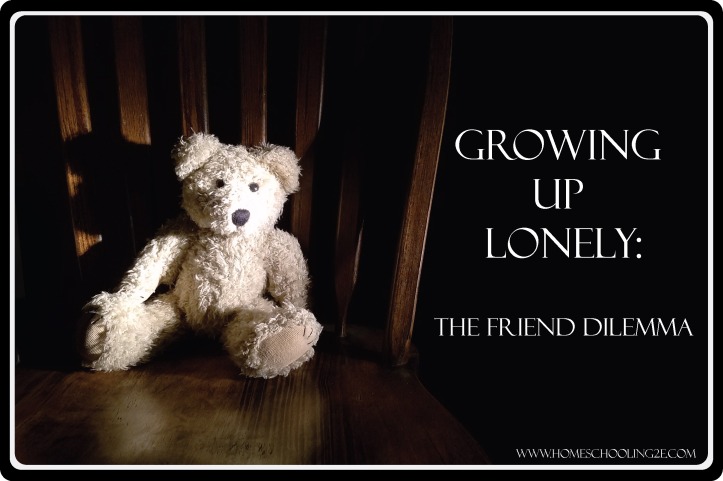 We get that dreaded socialization question almost every time someone hears we’re homeschooling.  I smile and nod, and answer gracefully.  Inside I’m secretly a bit worried.

The Engineer has one best friend.  One.  He has other kids around that he considers his friends but I’m not sure they feel the same way.  He struggles to maintain friendships because extracurricular activities are so difficult for him.  It’s hard to make friends when you don’t spend a lot of time with anyone.

He does fairly well interacting with kids at playgrounds, right up until the point he starts talking about things like open circuits, tornadoes, and Vesuvius.  They don’t get it.  Seriously, most adults don’t get it, but they’re gracious enough to smile and nod at him to be nice.  He’s already encountered bullying from neighbor kids.  I’m grateful that he was too oblivious to notice, but I seethed at the nasty attitudes and comments.   That was an eye-opening experience for us as parents.

If it wasn’t for his best friend, I’m not sure how low his self-esteem would be.

We lucked out.  We’re blessed that his best friend is like him: gifted.  I’m still trying to convince her parents of that.  I see it in the way she talks, the way she’s reading extremely well at five years old.  I see it in her boundless energy, her love of animals, and the way her imagination jumps whole-heartedly into a day-long adventure of pretending to be something or someone else.  She’s gifted.

I’m so glad we have her in our life, because without her the Engineer would be lonely.  Family is great but it’s not the same.  She gets him. She doesn’t care that he’s quirky or has meltdowns.  To her, that’s just the way he is.  Her accepting and caring mom has a lot to do with that attitude.

In an ideal world gifted kids would be surrounded and challenged by like-minded peers and mentors in addition to neurotypical kids.  Kids (and adults) need people they can relate to.  If you are the only zebra in a herd of horses, you might think you’re weird, bad, or undesirable.  It’s no fun feeling alone.  It’s depressing.

The Engineer isn’t typical.  He can blend in, he can try to fit in, but in reality he’s an island.  A small spot of quirkiness in a sea of kids that he can’t really relate to.  He tries.  He tries really hard to make friends, and he’s doing much better at being a friend than he used to.  But then the Twice Exceptional quirky bit shows up and they (or their parents) decide friendship is too much trouble.

Growing up gifted in an environment that accommodated me but never labeled me was a very lonely place.  I had very few friends.  I was the outsider.  The weirdo.  That strange homeschooler who would rather read than talk about cute boys or makeup.  I simply didn’t fit in, and I eventually gave up trying and internalized a lot of things.

It took the opening of the internet for me to find my peers and any kind of community.  It took marrying a wonderful guy who challenges me intellectually, supports me, and pushes me to do more than I think I can.  I don’t have a wide circle of friends but I am not alone anymore.  I’ve found my tribe.

It’s important for my kids to have people to relate to.  It’s even more important for smart, gifted kids to have a community of people on their level.  If they get used to always being the smartest person around it breeds egotism.  They need to be able to value people for their different skills and strengths, and be challenged and supported all at the same time.  I don’t want to raise an entitled, smug, gifted brat.  I don’t want my kids to lord it over the small pond – they need to be dunked into a big pond as fast as possible so that they can acclimate.  Balance in everything, right?

When the Engineer is old enough we’ll introduce him to the internet.  We’ll teach him safety and civility, and then we’ll let him loose on Minecraft or other online gaming and watch him find his tribe.  Your peers and your community don’t have to be right where you live.  Granted, it makes things easier and more fun at times, but it’s not necessary.  The internet is guilty of a lot of things but it’s done a great job of bringing us together in a global community.

I know there is hope around the corner.  I know that there is a whole world of people out there who won’t care how old the Engineer is.  They will only care about what he can do and how he thinks.  Age won’t matter, and quirky is normal.

For now, we are his community.  His family and best friend will meet him at his level and engage him mentally to challenge and support him.  We accept him and we love him for who he is.  Because he’s five, perhaps that will be enough until he can venture out and meet people who live halfway across the world.

It’s funny how writing things out can help you articulate how you feel.  I’m more at peace with this situation.  I think the next time I hear that nasty S word I’ll do more than smile and worry.

This post is part of a Gifted Homeschoolers Forum’s Blog Hop: the importance of finding intellectual peers and community.  Please click this link or the image to read more posts on this critical subject.  Thanks for dropping by!