Dear GPS, We Need To Talk 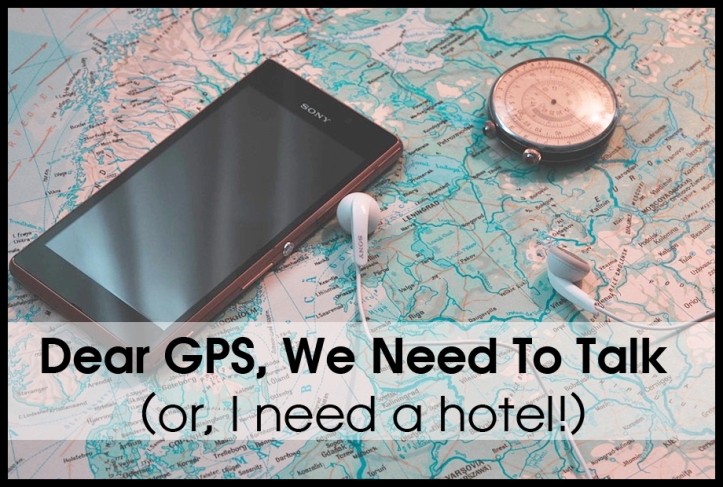 I’m home from the conference!  I’ll post more about that later, but since my brain is fried I’m doing this instead.

I don’t know how I managed without you all these years.  I suck at reading maps – I had to carefully analyze the directionality of one-way streets to make the 15 minute walk to the aquarium while at the conference.  I need you.

Because I need you, I tend to overlook the little minor bobbles and inconveniences that you consistently demonstrate.

I laugh and tell the story of us ending up in the middle of a horse farm because it’s funny now.  The bewildered looks on the farmhands’ faces, the point where we almost got stuck in the mud, the anxious questions of small children worried we were going to be mired in a pasture for the next few hours – it’s all funny now.

I don’t usually laugh about the time that two different global positioning system programs  couldn’t find the field trip destination on the main road and made me late, but I know to be gracious when others have the same issue.

I laughed when you sent me down and back up on an exit/on ramp because you thought it was the correct route, but I carefully made note of the spot so that I didn’t pull the same dumb move on the way home.  Sure enough, you commanded me to do it again.

I even giggle when you can’t get the directions correct and tell me “On your right” when you really mean “On your left.”

You see, last night you had a hiccup of over-concerned traffic avoidance and “recalculated” that route I carefully checked.  I didn’t realize you lost your ever-loving mind, or that my entire trip home would spiral into a caffeine-fueled trip from hell.  Nope, I had no idea!

I didn’t even realize that you had some ingrained avoidance issue about using major interstates, and that your programming insisted on a preference for small back roads instead of the wide and clear drive home.

I didn’t realize.  At least, not until the middle of the night on a small state route in the mountains, that you had gone off the deep end.  That your programming went from “inconvenient” into “a little dangerous.”

I know there was a glorious mountain view in there somewhere, but since it was pitch black middle-of-nowhere, I couldn’t see it.  I had no idea where I was and no map sense left after all the twists and turns.  I blindly committed to your impersonal commands because I had no other choice.  No signal either.

I made it home.  Safely.  Without getting stuck in morning traffic.  But I was NOT in a good mood.  I am not happy with you at all!  I think that the time has come – the thing you dread is required.

You need an update.  A software reload.  A personality wipe and reboot.  So long, GPS – it’s time to go gently into the night.  Kind of like I did last night.

2eHomeschooling participates in the Amazon Services LLC Associates Program, an affiliate advertising program designed to provide a means for sites to earn advertising fees by advertising and linking to amazon.com
%d bloggers like this: