What Exactly Is 2e Anyway? 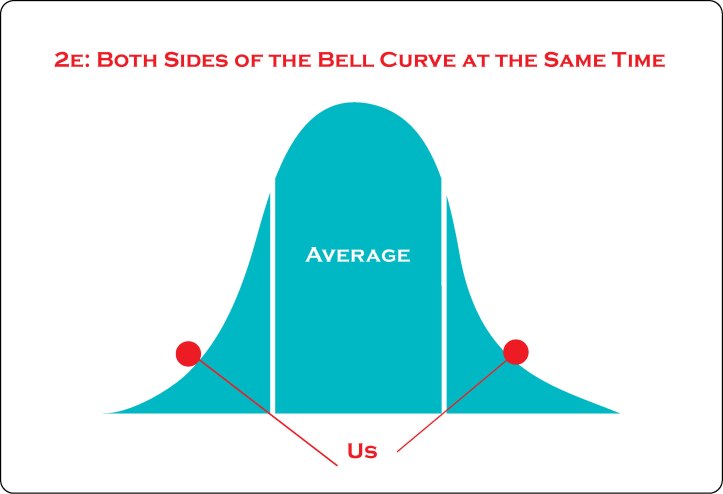 As I stood in the checkout lane at Target and tried to explain to the bewildered cashier what 2e meant, I realized that I do this a lot.  It’s a fairly new term, and it’s one that I really like because it encompasses the struggles that we deal with along with the positive side of things.  The problem is, no one knows what it means.

I try to avoid the G word – gifted, because neurotypical people often have a pre-set idea of what that means.  Whatever their preconceived notions are, they certainly don’t match the reality of the Engineer bouncing around in front of them and being a general pest.  So I say 2e: twice exceptional.  I get blank looks.

Even among the gifted and talented community I often get the cyber equivalent of blank looks.  It’s great when someone actually asks what I mean, because it opens up a discussion that can only be positive.

So, let’s talk 2e.  Twice exceptional.  If you know what this means already, ignore me and carry on.

Bluntly, twice exceptional is a gifted student with special needs.  Those special needs can be almost anything: ADHD, ASD, dyslexia, dysgraphia, you name it.  It’s an alphabet soup in here.  It’s rather common among gifted kids, and it makes sense if you think about it.  Gifted kids are wired differently than neurotypical kids.  And sometimes, that wiring isn’t firing correctly.

If you want to read more in detail about 2e,  Hoagies has a lot of links, as does SENG and the Gifted Homeschoolers Forum.

Now, you might be thinking “my kid has multiple diagnosis.  Are they 3e, 4e, 5e?”  Nope.  Just 2e.  Twice exceptional is a determinedly optimistic term that points out both ends of the spectrum.  The positive and the negative.  The strengths and the challenges.  You may have many different types of challenges, but one handy little umbrella covers it all.  That way you don’t have to break out the alphabet soup every time someone asks about your kid.

It’s also a covert way of saying my kid is gifted without using the actual word that evokes negative overtones.  And it’s something of an explanation as well.  The Engineer is gifted.  Very much so.  But he hasn’t been tested, and I know that a lot of people use the testing as the benchmark, particularly IQ testing.  How am I supposed to test a kid who won’t sit still?  Who can’t read?  Who gets easily bored and wanders off in the middle of things?  I know he’s gifted – anyone in the education field knows he’s gifted when they meet him, but there is no “official certificate” that I can whip out and quote numbers on.  Is he highly gifted?  Average gifted?  Almost neurotypical gifted?  (Fat chance of that.)  I just don’t know.

Gifted kids face challenges.  Twice Exceptional kids face almost insurmountable challenges without the support they need.  Their learning disabilities can present as disruptive behavior.  They struggle to cope with things like timed tests and the horrible challenge of sitting still.  They question everything but refuse to do homework.  They can be a teacher’s nightmare in traditional school.

Worse, they don’t test well in our test-focused schools.  I have a friend with a child the Engineer’s age in the local public schools here.  He has an IEP, he’s gifted, and he’s struggling in school.  Not because he doesn’t know the material, but because he gets an F for not writing the words correctly.  The teacher told his mom that he knows the material and will verbally answer correctly every time, but because he’s having issues with handwriting he fails the assignment.  How frustrating is that for a kid?  A parent?  A teacher, even, whose hands are tied and has to check the correct box and fail the poor kid.

The biggest problem with 2e kids in public schools is that they are completely out of the box.  No standard education will work for them – they need a customized education plan to succeed.  And no 2e kid is alike.  You can’t implement a Twice Exceptional program and expect all the 2e kids to do well, because they all have different challenges.

That is exactly why we’re homeschooling.  Traditional school would try to help the Engineer.  They would crush his spirit with negativity, albeit inadvertently.  He can’t behave.  He can’t help it.

He can’t sit still.  He can’t stop asking questions.  He can’t follow tamely and quietly down the hallway.  He just can’t handle being bored at all.  He can’t deal with the sensory input, and would have meltdown after meltdown because it’s just too much.  An IEP is a great help, but it’s limited.  Without an aide he wouldn’t be able to function.  School would be torture, not fun.  Not learning.

So we’re homeschooling.  We’re taking on the battle ourselves.  Armed with a lot of reading material, a lot of hands-on things, and a willingness to follow a stray question as far as we can into the ethosphere of the internet.

Or you could just call me a parent.  Because that’s my job: to teach my kid and help him cope.